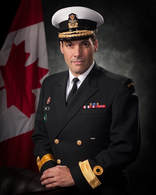 Commodore Simon Page, DND, DGMEPM, RCN
Commodore Page graduated from the Royal Military College in 1989 with a Bachelor in Computer Engineering.
On completion of his initial combat systems engineering training in various ships and naval establishments, he achieved his Head of Department qualification onboard HMCS NIPIGON in July 1992. Cmdre Page then commenced a four year tour within the Canadian Forces Naval Engineering School as a combat systems engineering instructor. In 1996, he joined HMCS ATHABASKAN as the Combat Systems Engineering Officer and participated in his second STANAVFORLANT deployment in 1999. Cmdre Page then worked as the Division Commander for the Officer Training Division of the Naval Engineering School and the Combat Systems Engineering Officer of Sea Training Atlantic.
In 2004, Cmdre Page moved to the Chief of the Maritime Staff organization in Ottawa as a HALIFAX Class Modernization Project Director for the Radar Upgrade and SIRIUS projects. One year later, he completed the Command and Staff Course and a Master in Defence Studies at the Canadian Forces College in Toronto.
After two years in the Director General Maritime Equipment Program Management as a Section Head and the Maritime MASIS Acceptance Project Manager, in June 2008, he was appointed Commandant of the Canadian Forces Naval Engineering School in Halifax. On completion of this Command tour, he completed the National Security Program and, upon graduation in June 2011, Cmdre Page assumed the duties and responsibilities of the Director Maritime Training and Education.  In December 2012 he was posted back to DGMEPM as Chief of Staff.  In June 2015 he was promoted to his current and assumed the duties of Director General for the Maritime Equipment Program Management Division.

Mr. Tony Williams, ESEP, Director INCOSE Americas Sector
Tony joined INCOSE in 2008.  He has served in the local chapter in a number positions, including twice serving as Chapter President.  In 2016 he led the Texas Gulf Coast Chapter to its first ever Gold Chapter Award.  He played a central role in planning the Inaugural TGCC Conference on Collaboration between SE in Oil and Gas and Aerospace, serving as Technical Chair.  Several years back, He led a 15 week breakfast seminar for CSEP training, and he’s been a chapter speaker several times.


Tony is an ESEP and Certification Application Reviewer, and the coordinator for the Jacobs INCOSE MOA.  He’s also served as a Technical Paper reviewer for IS 2015 and 2016, and helped facilitate the Practitioner Challenge at IS 2016 where I also served as a Session Char.


At Jacobs Engineering, Tony serves as the Chief Engineer, Systems Engineering and Integration, developing flight systems for the International Space Station (ISS) and Orion.  I also serve as Jacobs Engineering Project Manager for the Orion Ascent Abort-2 test.  Previously, I was the Jacobs Project Manager for the ISS Simplified Aid for EVA Rescue (SAFER), a complex safety-critical jetpack that provides final self-rescue opportunity for a stranded astronaut who has drifted from the ISS. Prior assignments include serving as a Lecturer at the University of Houston where I taught a Master’s level Systems Engineering series, and as a Senior Associate at Booz Allen Hamilton, with roles ranged froim launch mission assurance studies to development of exploitation tools for multi- and hyper-spectral imagery to modeling of satellite constellation replacement needs.

Disclaimer
All programs and events are subject to change and/or cancellation due to scheduling conflicts, low registration and/or circumstances beyond the control of INCOSE Canada. INCOSE Canada does not recommend or endorse any specific product, course of treatment, procedure, opinion or other information offered during the INCOSE Canada Conference.
Powered by